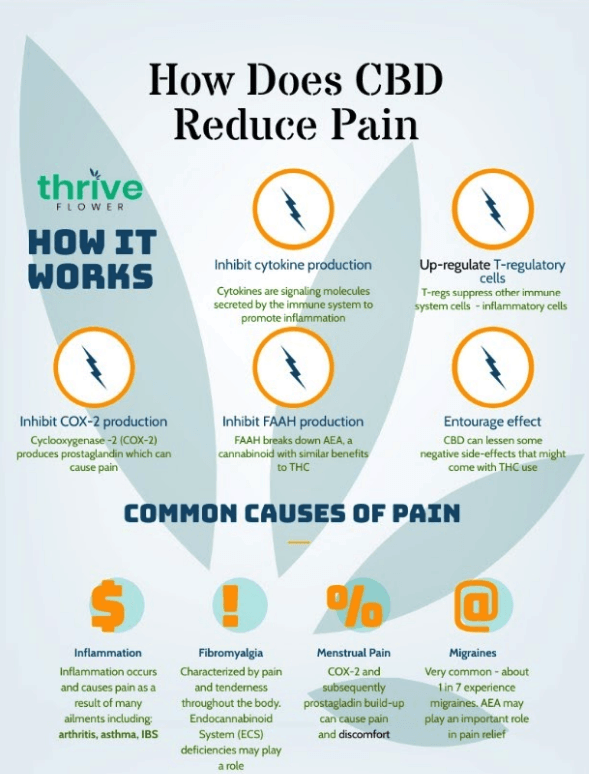 Does CBD Help With Pain?

Each cannabinoid has a different effect on the body. CBN, CBG, THCa, THCv, etc. are all being studied to further our understanding of how these cannabinoids affect our body and the mechanisms that allow them to do it. So how does CBD help with pain?

The number of studies on CBD benefits and pharmacokinetics has increased dramatically since the passing of the Farm Bill (2018) which made hemp legal to produce, manufacture, and sell. CBD interacts with our body’s Endocannabinoid System (ECS). The prefix, endo, means from within, so the Endocannabinoid System is a system of cannabinoids within your body. It’s no wonder cannabis seems to fit so well into our body’s mechanisms to alleviate pain and anxiety, help with sleep and appetite, and many more benefits. The main goal of the ECS is to maintain a stable, balanced level of functionality between all the interconnected systems in your body. This is called homeostasis.

The ECS is made up of three main parts:

There are two main cannabinoid receptors, CB1 and CB2. CB1 is mostly found in the brain and CB2 in other parts of your body’s nervous system. The third part of the ECS, metabolic enzymes, break down the cannabinoids and end the signaling.

Cannabinoids interact with your body’s ECS to maintain homeostasis. Different cannabinoids can have different effects. THC is the mostly commonly used cannabinoid because of its potent effects, but sometimes the amount of THC used can have negative effects such as light-headedness, anxiety, and even nausea. Recent studies have been looking at the use of other cannabinoids, such as CBD, to reduce the negative side-effects THC may produce. Therefore allowing the benefits THC can provide to continue without discomfort. This is called the entourage effect.

So now let us get into how CBD can alleviate your pain and the different types of pain we may feel.

Does CBD Help With Pain?

Through medical studies over the past few years, CBD has shown that it has a lot of potential to help with pain from inflammation, arthritis, asthma, fibromyalgia, irritable bowel syndrome, migraines, menstrual cramps, and much more. CBD is a desirable alternative and natural solution because evidence shows that may help reduce pain levels with minimal to no side effects.

Does CBD help with pain from inflammation? When part of your body experiences inflammation, that is your body trying to heal itself. Your body’s biological response to a perceived threat such as tissue injuries, infections, arthritis, and autoimmune diseases can involve inflammation. In the case of autoimmune diseases like psoriasis, the body mistakenly attacks otherwise healthy tissue. CBD has been shown through studies to have promising potential for treating inflammation by inhibiting the production of pro-inflammatory cytokines (i.e., IL-6, IL-8, and TNF-α) (Petrosino, et al).

Cytokines are small proteins that play an important role in cell-signaling. These proteins send out pro-inflammatory signals to the body and CBD can inhibit the production of them, therefore slowing the inflammatory response. Additionally, some models have shown CBD to increase levels of T-regulatory cells. T-regs regulate and suppress immune cells that are responsible for the inflammatory response (Nagarkatti, et al).

There are two types of arthritis: osteoarthritis (OA) and rheumatoid arthritis (RA). Osteoarthritis is a result of long-term wear and tear on your joints. Cartilage between your bones keeps bodily movements fluid and pain-free, but as these cushions wear away, bones can begin to rub together causing pain and restricted movement. Cannabinoid receptors and endocannabinoids (2-AG and anandamide) have been discovered in biopsies “providing further evidence for a functional endocannabinoid system in osteoarthritic joints” (Miller and Miller).

There is evidence the endocannabinoid system can limit the pain of patients with joint disease (Miller and Miller). All this points towards the promise CBD shows in reducing the joint pain felt by OA patients.

Rheumatoid arthritis (RA) is a result of the body’s immune system mistakenly attacking the synovial membrane that lines joints. The membrane can experience inflammation which can cause discomfort, pain, and immobility in the patient (Mayo Clinic). As mentioned above, CBD can limit the production of pro-inflammatory proteins, making it a potentially powerful aid against the pain RA patients may feel.

Asthma is when a person’s airways become inflamed and extra mucus is produced making it difficult to breathe and even cause chest pain. Another aspect of asthma is hyperresponsiveness. This is when a stimuli, such as an allergen, causes airways to overly respond whereas the stimuli would have significantly less effect on a healthy person. We have already discussed how CBD can greatly reduce inflammation by limiting cytokine production. This remains true for asthma related inflammation of airways.

A recent study found that “CBD treatment significantly decreased the levels of cytokines involved in the immune response to an allergen”  (Vuolo, et al). Another study determined that “CBD treatment, regardless of dosage, decreased airway hyperresponsiveness” (Abreu, et al). It seems CBD may be able to help asthma patients breathe easy and pain free.

Fibromyalgia is characterized by muscle pain and tenderness throughout the body. Studies have described the role deficiencies in the ECS can play in fibromyalgia onset and the pain patients feel (Smith, Wagner). ECS deficiencies refer to a lack of cannabinoids present in the body which can have adverse effects on the responses and processes the ECS performs in the body.

Many studies have looked at the success cannabis has had in reducing fibromyalgia pain. Patients report “significantly less pain” (Russo) and some (22%) even decreased or stopped current medications such as opioids (Sagy, et al). By manipulating the ECS, CBD and other cannabinoids have promise for reducing the pain felt by those with fibromyalgia.

The symptoms of IBS are well known. They include cramping, abdominal pain, constipation, and diarrhea and up to 20% of Americans experience symptoms of IBS (Hepatol). Although the exact causes of IBS are not known, it has been shown that ECS deficiencies have something to do with it (Smith, Wagner). The ECS provides protection to your gastrointestinal (GI) tract by suppressing inflammation (Massa, Monroy). Using CBD to activate your ECS may be a path to reducing the pain and discomfort felt by those suffering from IBS.

Irritable Bowel Disease (IBD) is not the same as IBS, but they share similar symptoms. The term, IBD, includes two types, Crohn’s and Ulcerative Colitis. The causes of IBD are not well known. What is known is that the immune system mistakenly views healthy cells as viruses or bacteria. The immune system activates an inflammatory response to fight these ‘foreign organisms’, but it is actually harming an otherwise healthy GI tract (CDC). It has been shown that “THC and CBD not only reduced inflammation but also lowered the occurrence of functional disturbances” (Molleman, et al).

The same study showed that THC was shown to be more effective on its own compared to CBD, but CBD, when added to an ineffective dose of THC, made it effective. This is an example of the entourage effect in which CBD boosts the benefits THC can provide.

Experiments on mice found CBD was able to “reduce reactive oxygen species production . . . “ (Borrelli, et al). Reactive oxygen species are signaling molecules that progress inflammation. The study concluded that CBD “prevents experimental colitis in mice” and that is the first step towards human trials. There is still much research to be done on the exact mechanisms that allow CBD and other cannabinoids to affect IBD symptoms.

The pain women feel from getting their period can range from barely any pain to pain so bad you can’t get off the couch. The pain felt during period cycles can, in part, be attributed to a group of lipid compounds called prostaglandin. Prostaglandin are produced by enzymes called cyclooxygenase (COX, specifically COX-2).  As the period progresses, levels of prostaglandin and COX-2 increase, leading to inflammation and pain. Studies looking at how cannabinoids might affect levels of such enzymes and lipids in the body have found promising results.

Does CBD help with pain from menstrual cramps? One found “ . . . CBDa in cannabis is a selective inhibitor for COX-2” (Taketa, et al). As mentioned above, CBD can inhibit the production of pro-inflammatory molecules called cytokines. This can help lessen the pain caused by period symptoms. Studies specifically aimed at CBD’s effect on a woman’s reproductive systems are needed to better understand the relationship.

Migraines affect more people than diabetes, epilepsy, and asthma combined (Migraine Trust). Nearly 1 in 7 people experience migraines and about 2% of the population experiences chronic migraines. Someone with a migraine may experience pain in the head and/or neck, light sensitivity, dizziness, nausea, and irritability. One major cause of migraines is activation of the trigeminovascular system (TS) which is a system of nerves in your brain.

The Endocannabinoid system (ECS) has been linked to the TS via an endocannabinoid called anandamide (AEA). AEA, when interacting with the cannabinoid receptor, CB1, has similar effects to THC. Using marijuana to help relieve migraine symptoms is a common self-medication method (Cuttler, et al) and cannabis mostly consists of THC.

It was found that “cannabis reduces self-reported headache and migraine severity by approximately 50%. However, its effectiveness appears to diminish across time and patients appear to use larger doses across time, suggesting tolerance to these effects may develop with continued use” (Cuttler, et al).

Remember the third part of the ECS, metabolic enzymes that break down cannabinoids? Fatty Acid Amide Hydrolase (FAAH) breaks down AEA. Recent studies have found that CBD can inhibit the production of FAAH, allowing a build up of AEA (Greco, et al) (Lochte, et al). CBD can also help reduce some of the negative effects that may come as a result of using too much THC via the entourage effect.

Does CBD Help With Pain Summary:

No comments to show.

Welcome to
My Rewards

Join our loyalty program to unlock exclusive perks and rewards.